The 5 time Champion Kobe Bryant said he has “no beef” with Shaquille O’Neal after statements became public that Kobe was convinced he could have had “F***ing 12 rings” if the The Big Aristotle had Bryant’s iconic and inspiring work ethic.

Bryant tweeted Wednesday that their “beef” remains in the past and there’s “nothin but love” between him and Shaq, who won 3 consecutive championships and actually trademarked the word “3-Peat” together as a team in the early 2000’s.

The legendary duo was trending after a quote that Bryant had made at the PHP Agency convention in Las Vegas came to light this week. On July 29, The Black Mamba made the comment that if Shaq worked harder he could have had “F***ing 12 rings” and that the big man would be “the greatest” had he spent more time working on his game in the gym.

“Man, this dude was, he did not care. He was mean. He was nasty. He was competitive. He was vindictive. He was … yeah, I wish he was in the gym. I would have had f—ing 12 rings.” Kobe definitely let his voice be heard, but is he wrong? We will never know.

The video was posted by lakers24ever on Instagram, Shaq immediately fired back twice commenting:

“U woulda had twelve if you passed the ball more especially in the finals against the pistons #facts,” O’Neal commented.

O’Neal added: “You don’t get statues by not working hard”

But Bryant tweeted this remark that their was no new feud between the two and also retweeted a comment noting that he was complimentary of Shaq during his comments about the big man. 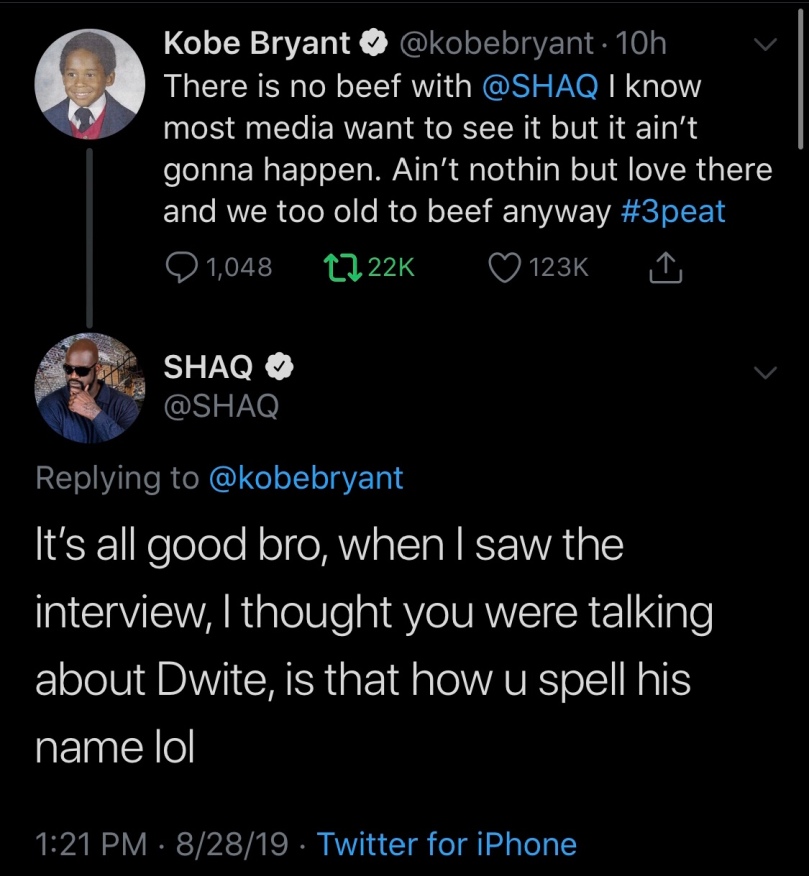 Shaq clearly took it wrong, but fortunately he forgave Kobe and ended up responding, accepting the apology and of course, started making fun of “Dwite” Howard instead.